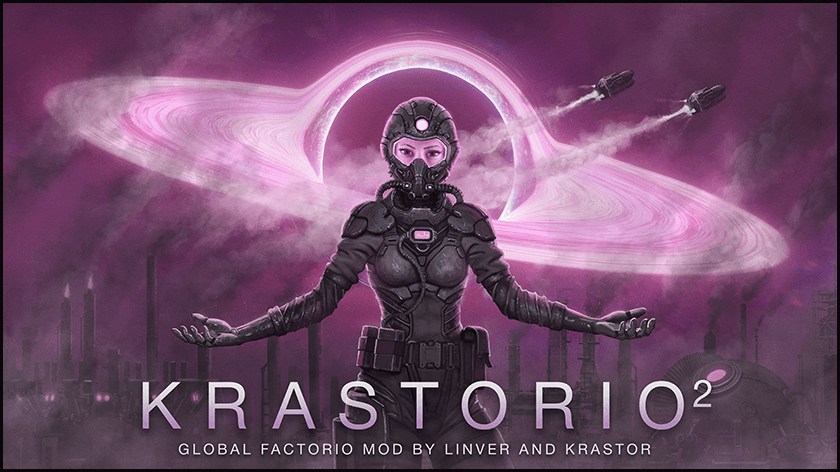 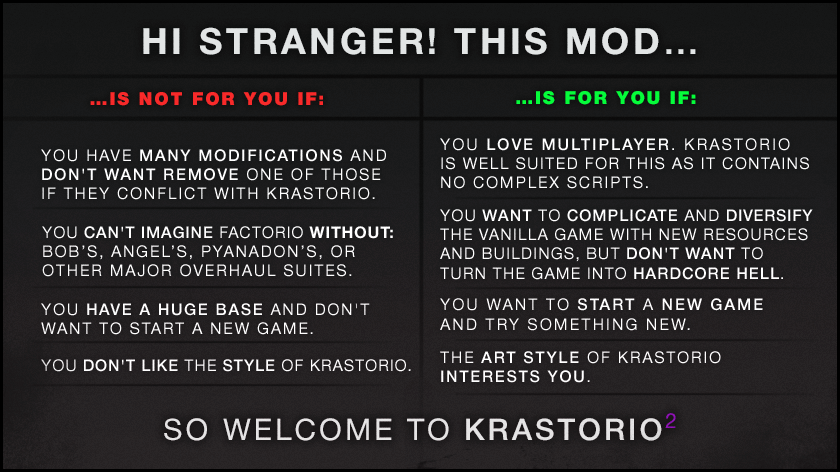 Krastorio 2, like it's predecessor, introduces new energy sources, buildings, ores, technologies, turrets, coverings, fuel, ways of producing science, and a major re-balance of many vanilla features. Instead of creating an augmented experience, a total overhaul, or revolutionary new gameplay we wanted to expand upon the vanilla style of the game that we love. To accomplish this we paid special attention to the energy systems and endgame. All of this was accomplished from scratch in order to improve upon the code scturcture and balancing. The mod adds a large number of improvements from Krastorio Legacy such as: 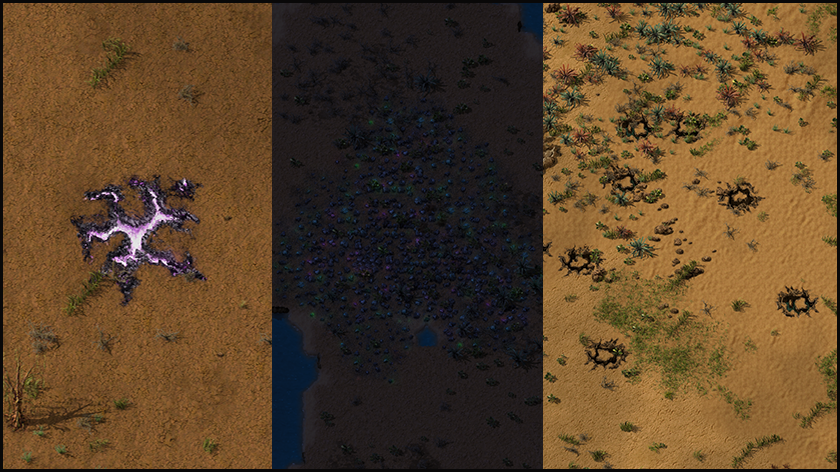 Let's take a look at the four new resources:

And now we introduce a completely brand new feature: 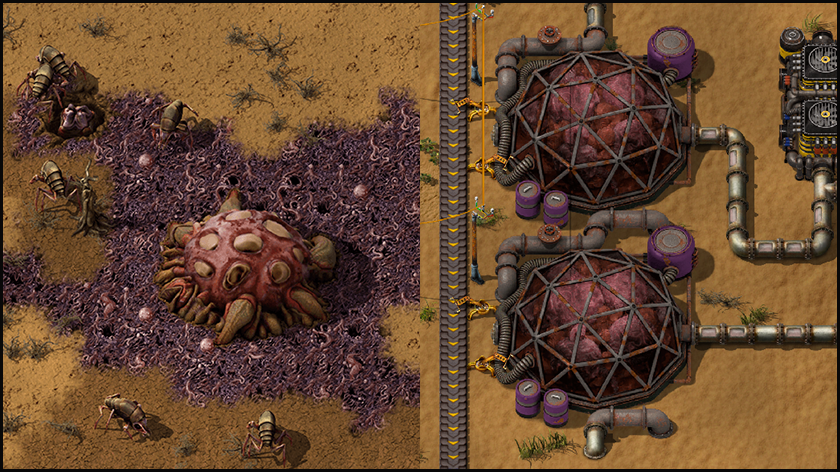 This is Creep which is generated under biter nests and can be harvested to produce biomass. Biomass is used for military research and to make items like fertilizer or first aid kits. In the early game in order for players to improve military research they must collect creep killing biters bases, later in the game is possible grow it using the bio lab.

Another feature we are proud to introduce is our in-game WiKi: 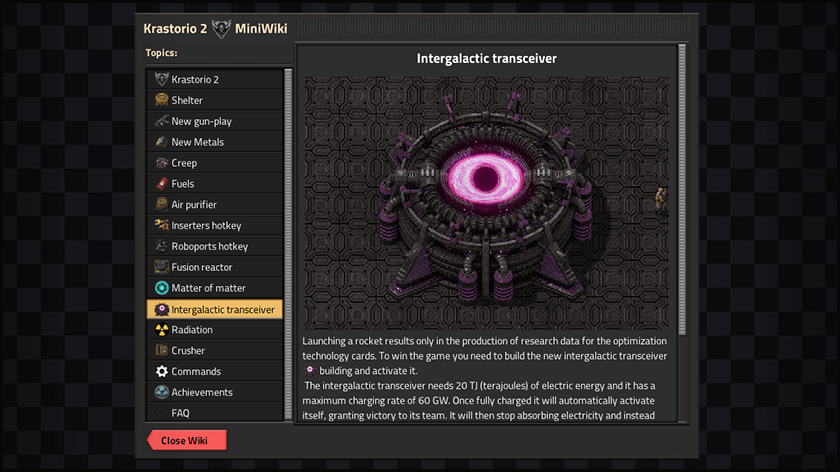 We hope that other modders will take Krastorio 2 as example and in-game WiKi will become the standard for all global mods! Also, at one point, Krastor went crazy and deicded to do a combat and fuel overhaul: 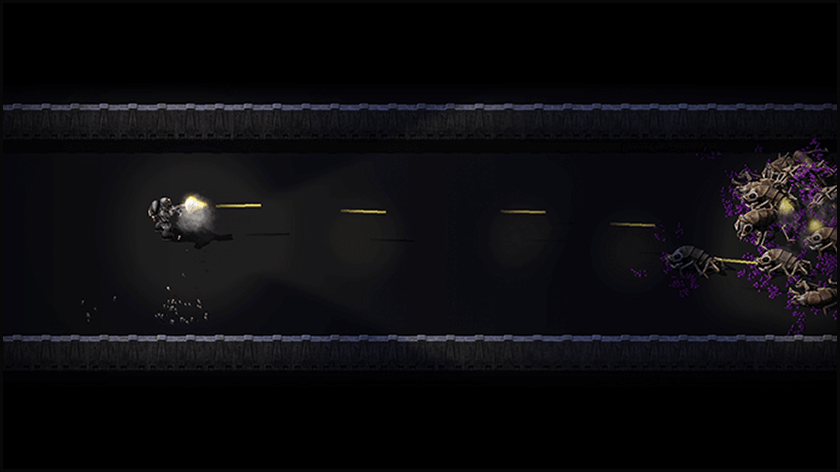 Thanks to Linver, you can turn it off in the settings, but it’s definitely worth trying new battles. This is similar to KS Combat by Klonan, but optimized for Krastorio 2 with some different features. Now, bullets are physical objects that have their own speed and slow down during flight. Also, the different types of ammunition are painted in their own color and have unique features:

Another feature is that the range and speed of the bullet depends on their size and the length of the weapon. For example, the fastest bullets are for the sniper rifle, bullets for a rifle are slightly slower and bullets for a pistol are the slowest.
The next unique feature that we want to talk about is a new victory condition.

Now it’s not enough to launch a rocket. You need to create an Intergalactic Transmitter to send the S.O.S. signal to the native star system. Now you have the sense and motivation to develop your base after launching a rocket. New achievements have also been added. Yay! 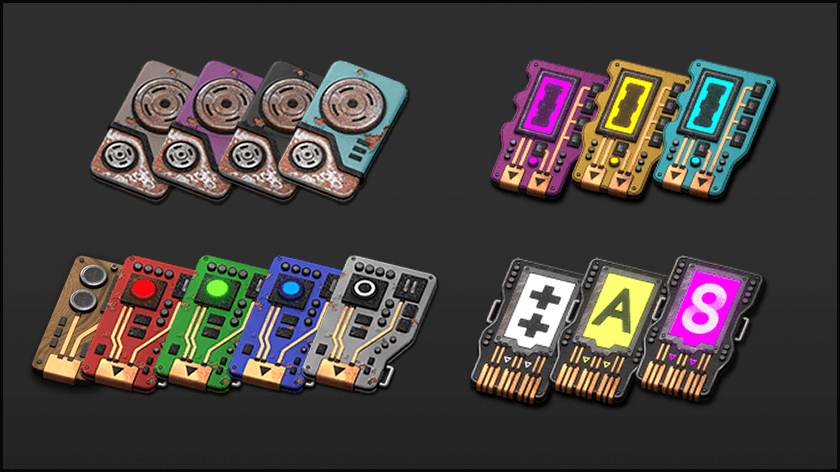 Science packs have been reworked, they are now all tech cards. Tech cards are divided into three tiers of cards and four types of research data. Each tier can only be researched with the right type of laboratory: 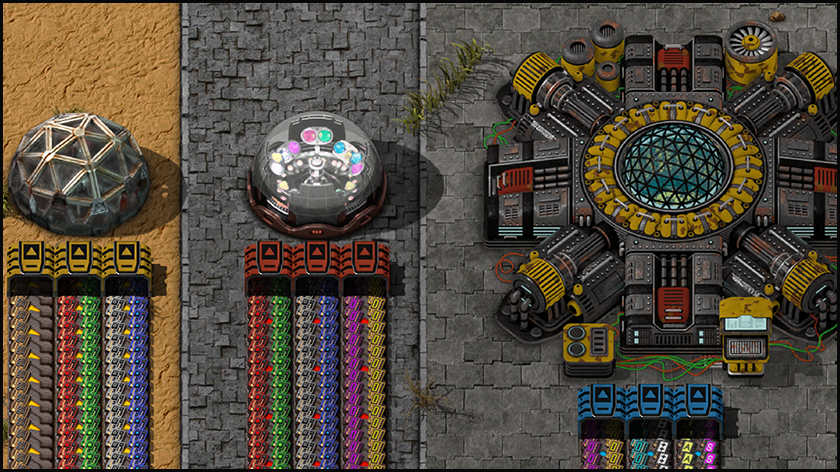 (You can see BiusArt lent us the sprites for one of the labs.)

As in KL, equipment in Krastorio 2 is an important part of the mod. Moreover, along with fuel overhaul, equipment for transport is necessary to increase the transport speed. Be careful, all generators require fuel. 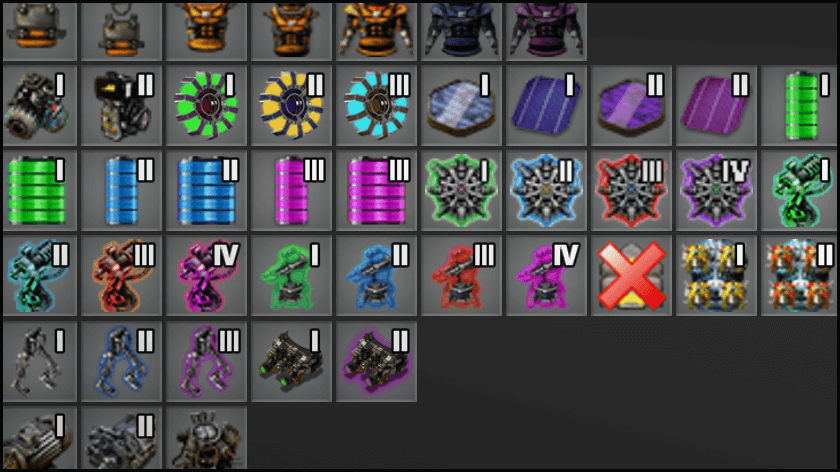 We are exhausted from constantly telling people that many aspects of the mod can be customized in the settings. So don't forget to check the before you start playing! Also check out the in-game WiKi where you'll be able to find answers to many of your questions! 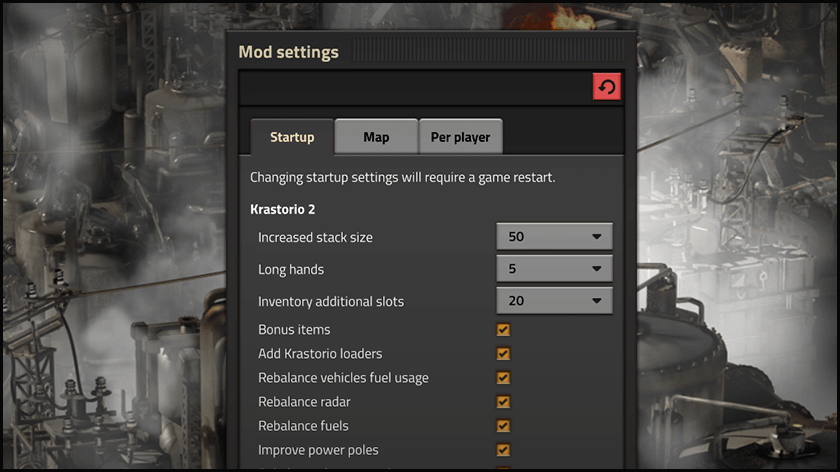 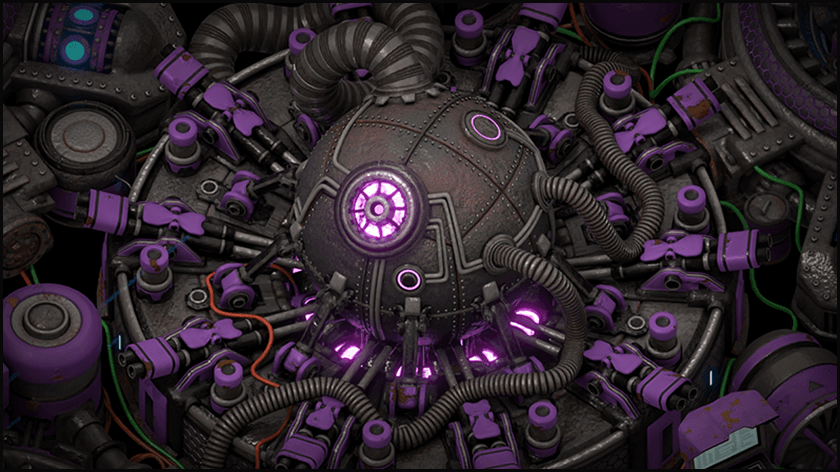 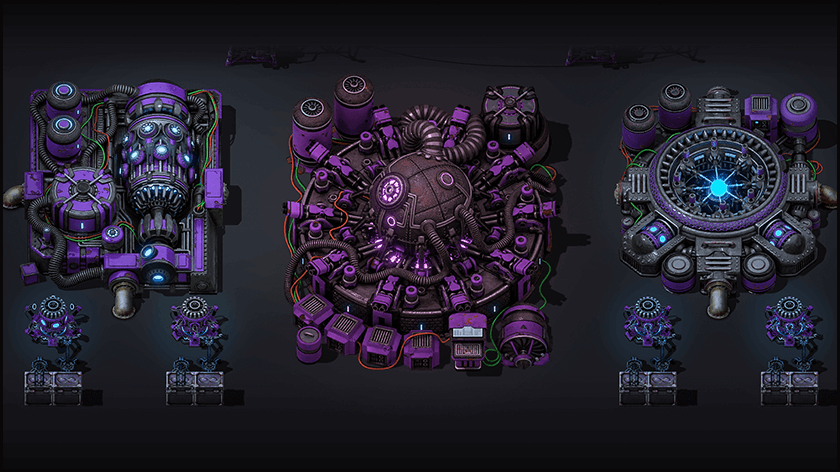 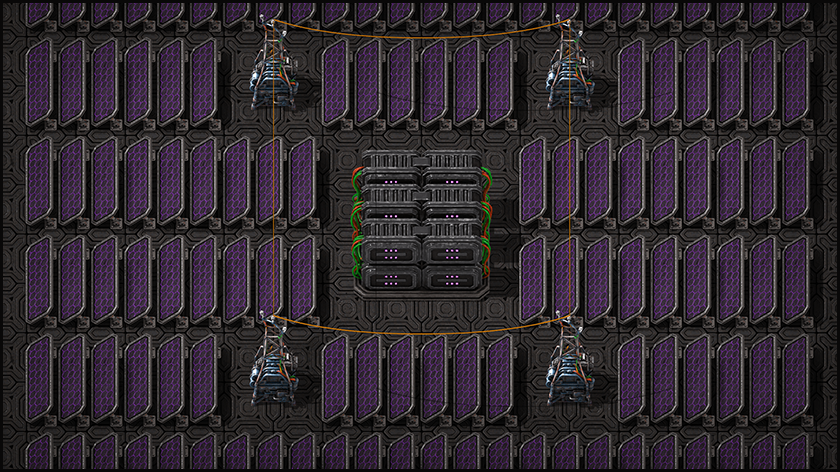 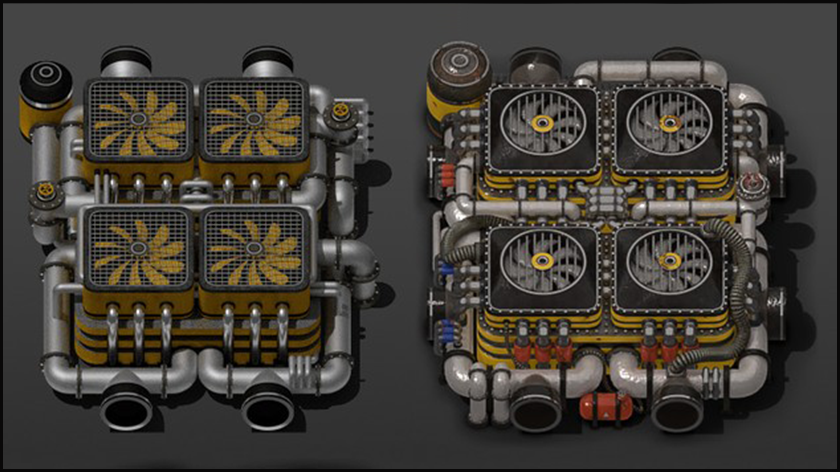 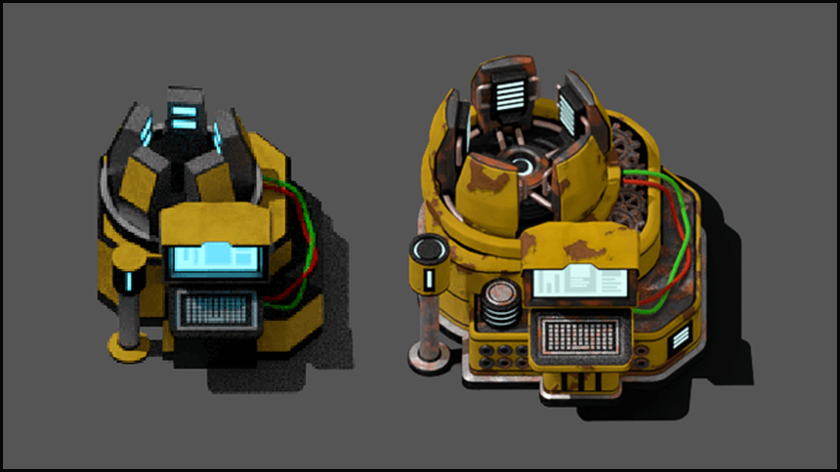 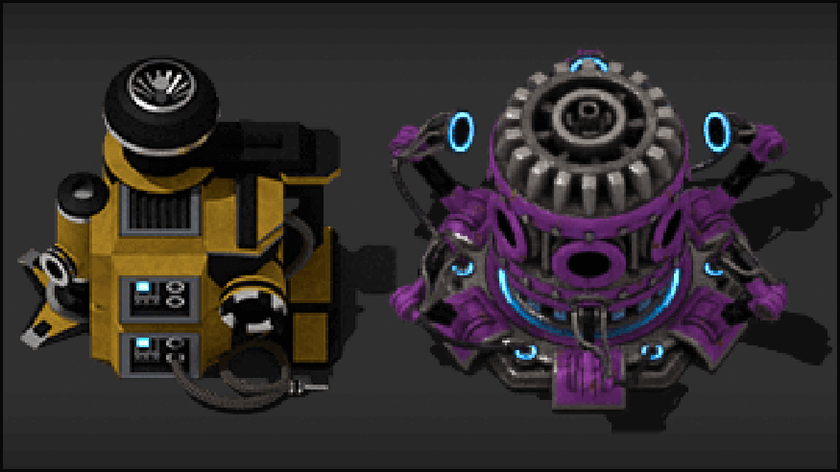 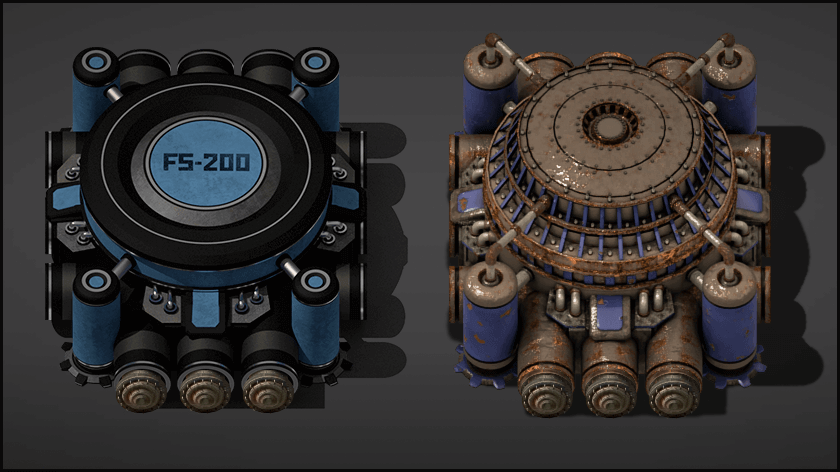 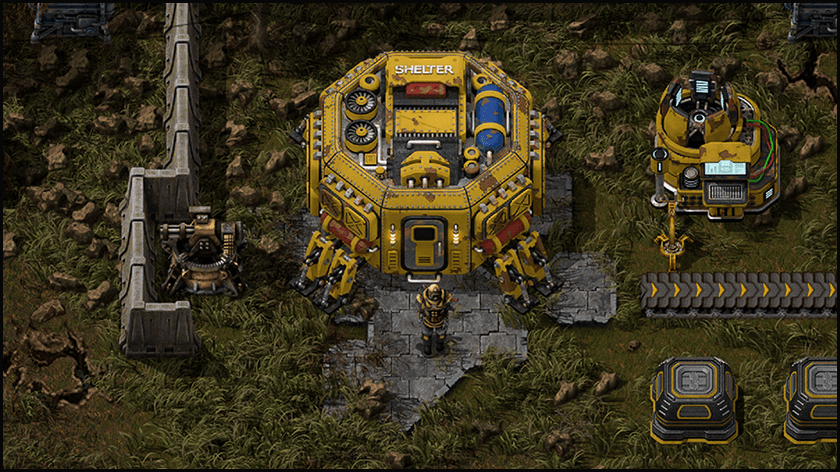 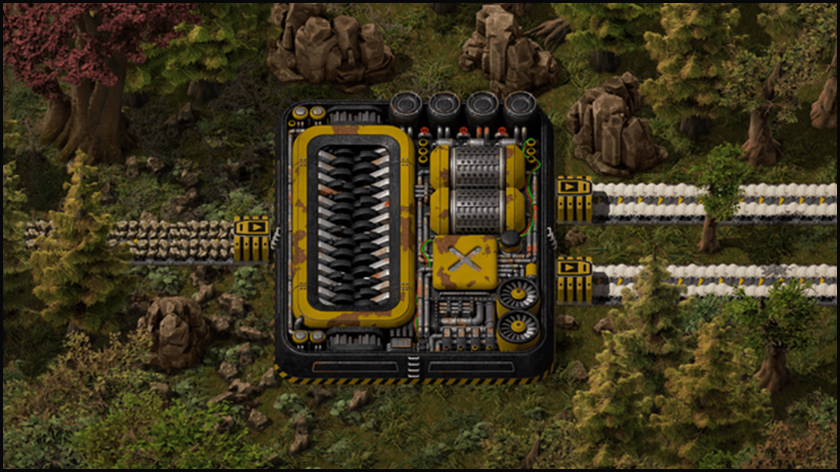 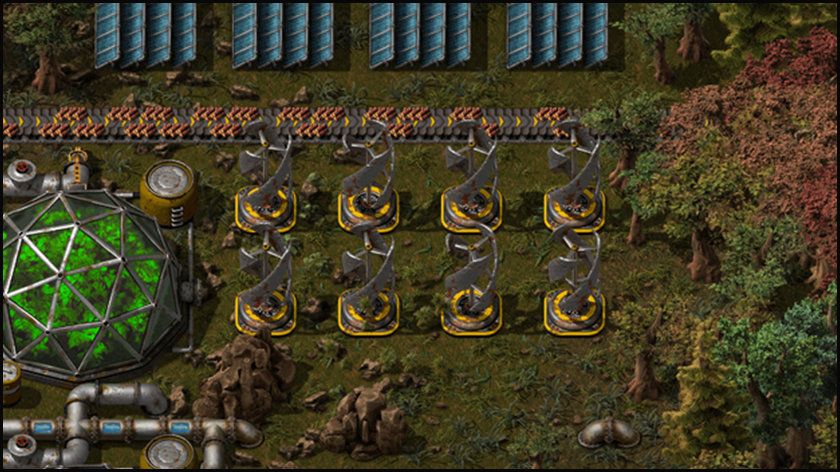 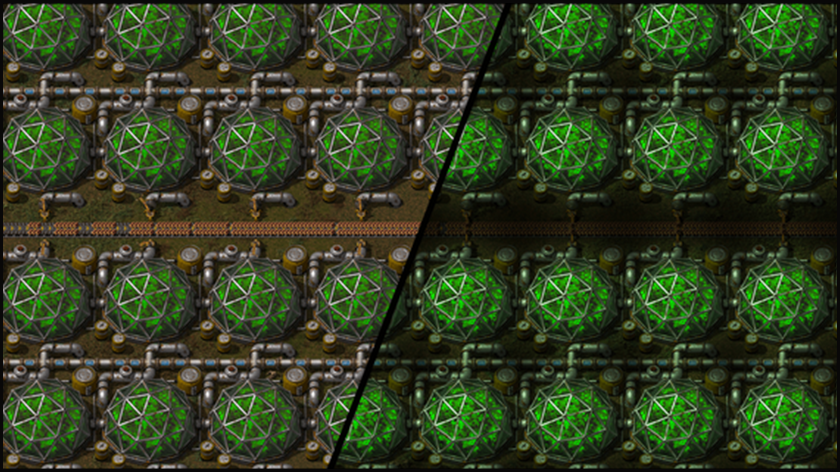 You can find a lot more K2 graphics on this page!

And we are grateful to all guys on Crowdin that help us making this possible.

This is the list of tested and compatibilized mods:

NOT COMPATIBLE WITH B&A. Why? It is not easy to make compatibility for global mods. We simply don't have the time and energy to do this. If you would liketo do this yourself Krastorio 2 has many tools for this and has an open license, so you can use all of our resources.
In general Krastorio 2 should be compatible with many small mods.
And remember, Krastorio 2 already contains many QOL improvements.
For now, talking about big mods, is compatibility only with Space Exploration.

Know bug:
- If you have admin powers in your game, don't install energy absorber in grid equipment of other character of other players, each player should manage the grid of their characters. If this happen try to quit and rejoin the game, all should be fixed.

We want give special thanks to:

This mod is part of mods developed by Krastorio Team