A complete overhaul to the ordinary personal vanilla equipment, this mod(pack) adds five brand new tiers of fusion reactors to boost your power production. (In this case, I've also changed the ordinary vanilla textures with some fresh, high-tech custom ones.)

A complete overhaul of the vanilla Power armors: this mod adds several tiers of armors and allows you to organize them depending on your needs.
Let me explain this concept a little better.

Every type of equipment has its respective mod.
This allows you to further customize your gameplay, as you could, like the power armors and the fusion reactors, but prefer not to modify the vanilla exoskeletons or roboports: the choice is yours.
(I recommend playing all the equipment mods due to the optimization, as the mods receive interesting buffs if played simultaneously with all the others.)
(You can find the entire list of the mod pack at the bottom of the page and the optional dependencies in the download section.) 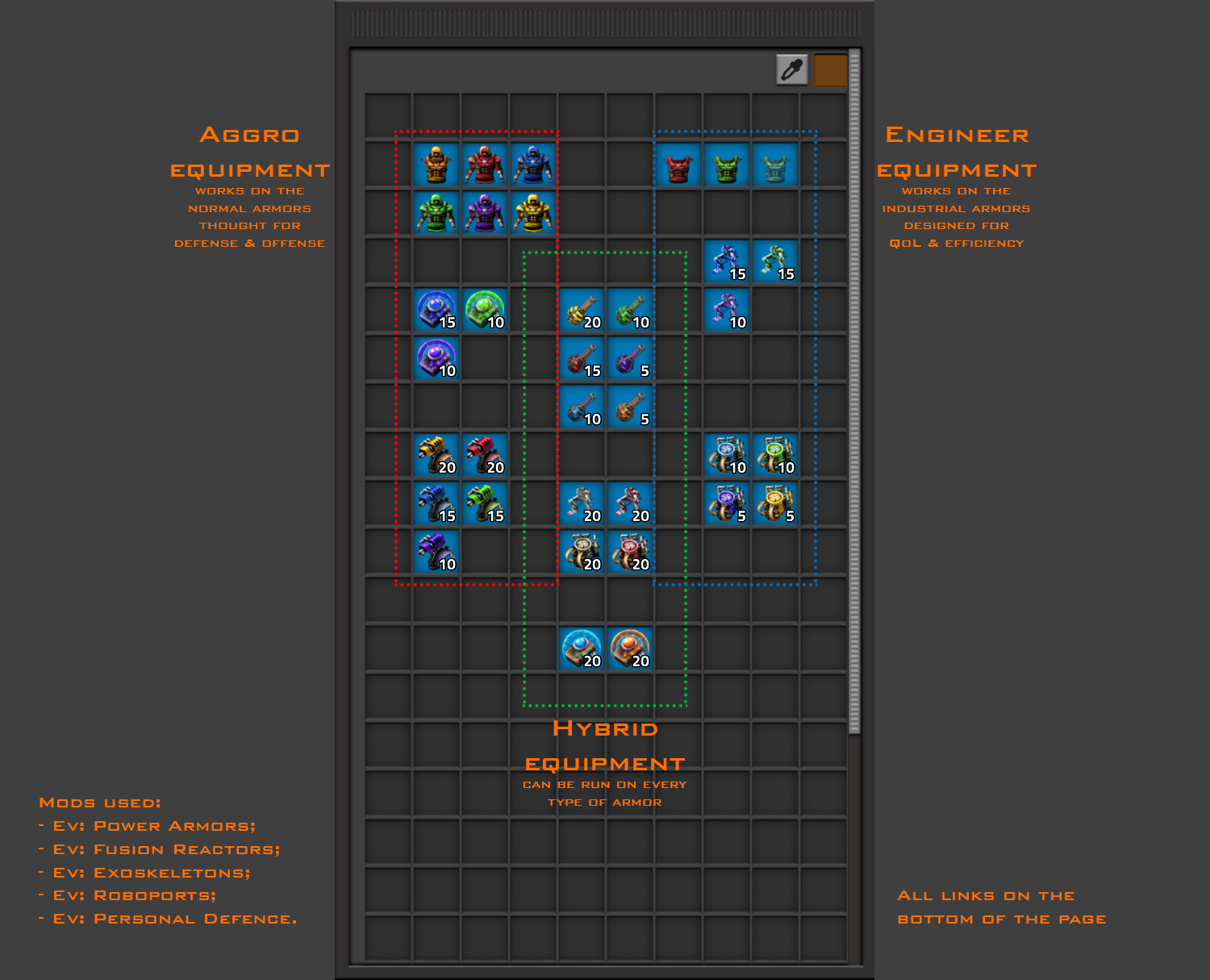 Since this mod pack has not a forum page, as I've not completed it yet, you can follow me on my discord server where you can tell me your idea and/or any suggestion on my mods.
On that forum, you can find a dedicated section on all the mods/mod packs I'm currently working on.

The craftings and technologies change based on what mods you install, so if you want some mods that aren't mine to be supported, (Not mayor mods, please, I'm already too busy D:) tell me.

These armor mods are thought of as helper mods and don't completely overhaul the game.
However...

I'm planning on releasing the "Intermediates" mods, thing that will change:

So... what will be of these amor mods?

I had this idea on my mind for over a year: maybe it's time to do something shall we?
(Disclaimer: The Intermediates mods won't be released until they are at least playable.)

(For the deprecated or older mods, see my mod page.)

Yes, you can directly support me and my creations if you want... and demonstrate to someone in my house - eEhm... - that this is not a waste of time.
Apart from jokes, this helps me understand if and which content you appreciate, other than encouraging me in modding Factorio, as I do it in my free time for fun and I can't enter in your mind and understand what's wrong (if there is something wrong).
In change, you also obtain something: a dedicated section both on Patreon and Discord, where you can directly talk to me and pre-release content.