This mod adds a special kind of consumable belt, which are used for easily placing ghost belts.

Create replicating belts by researching the relevant technology after each tier of logistics technology; build them with their tier of belt plus an electronic circuit. 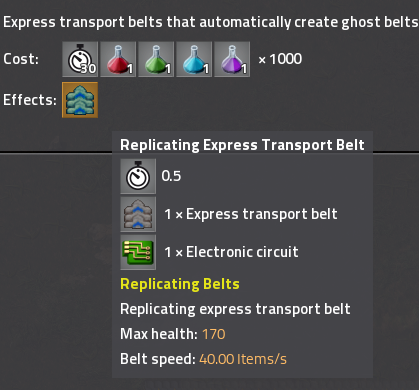 Line replicating belts up to get them to activate and create ghosts, placing the special belts at both ends and at any corners where you want the belts to turn. Build either forward or backward from the replicating belt chain.

Press the rotate key (R) while hovering over a replicating belt to cause it to downgrade to a normal belt of that type, to prevent accidentally leaving replicating belts around that may unintentionally activate later.

In cases where the replicating belt didn't create any ghosts (when manually rotating with R to trigger the downgrade, or when building while running with the mouse held down) the replicating belts will instead consume standard belts of that tier from the player's inventory, if they have any. Simply: the mod tries not to penalize you for building using the special belts in situations where you aren't using their ghost-creation ability, so that you don't need to also keep the normal belts on your toolbar. (Note that construction bots don't get these refunds!)

A blueprint book like this is useful for laying corners when you're working with multiple parallel belts.

Laying ghosts isn't terribly useful until something can build them - if you'd like to make use of this mod for the early game before construction bots are researched, the Nanobots mod should help you.

Translations and other contributions are welcome, preferably through GitHub.

Also supports any modded underground belt types which play nice with other mods and allow ghosts to be placed, like:
- Longer Transport 2 16 Update
- DistancePlus