Will be updates to modmashsplinter them see the modpage for details

I found this mundaTV https://www.youtube.com/playlist?list=PL8-nHpb5DO-PEOa7TvJxyIacvXoEr5Sm3 65 vids wow, thanks for playing the mod :-)
It's the old version of modmash but still cool to see, He is also on twitch https://www.twitch.tv/mundatv

Launching a rocket alerts Them to your presence. They come with one goal to wipe you out.
The late game enemies build their own base, harvest resources and expand.
They will also raid attack or defend.
To destroy them you must elimenate each roboport.. They will come back a little faster and harder each time. 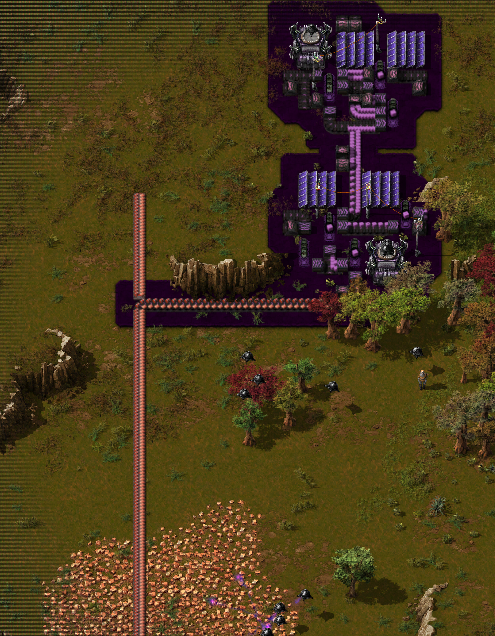 Make sure you don't let them progress too far or it may be your doom. 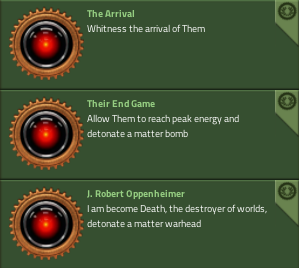 Rid Nauvis of the Queen Hive and explore New Worlds. 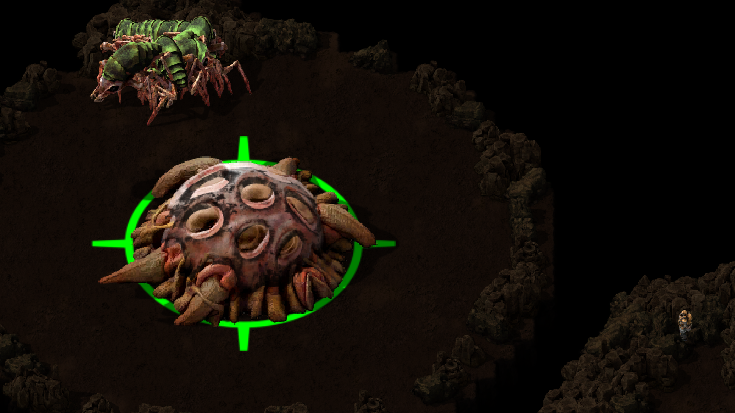 This mod introduces a very tough Queen hive underground which needs to be killed to unlock alien science packs
Then you can build terraformers which if they have clones in the modules slots will terraform the area around them
Clones can be trained to become explorers brutal training regime many will perish.
Clones can be used as productivity modules, slightly better. 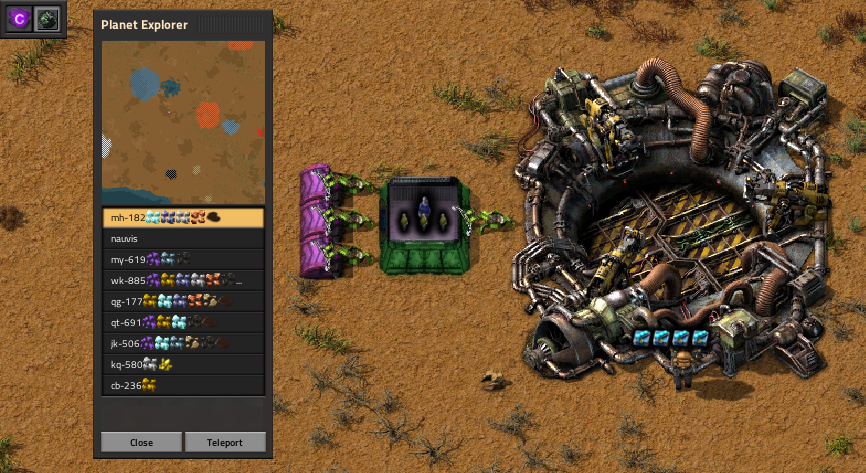 Put the explorers in a rocket to unlock new planets
Use tech to improve chance of explorer's finding new planets.

Spaceports are large chests that handle the transport of items between planets.
the time it takes is effected by the distance between worlds, but there is research for that. 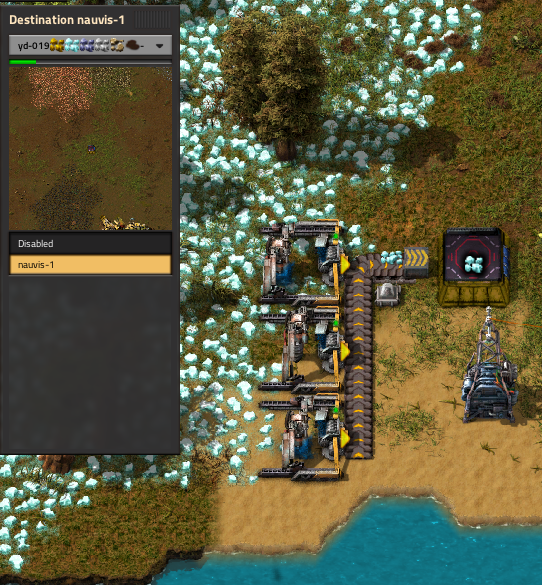 Open the port and select the destination

Valkyries serve as either combat bots from roboports or as constructions bots.
These drones operate with hit and run tactics, move in fast take your shots and move out.
Work with Spidertons, Players and Roboports 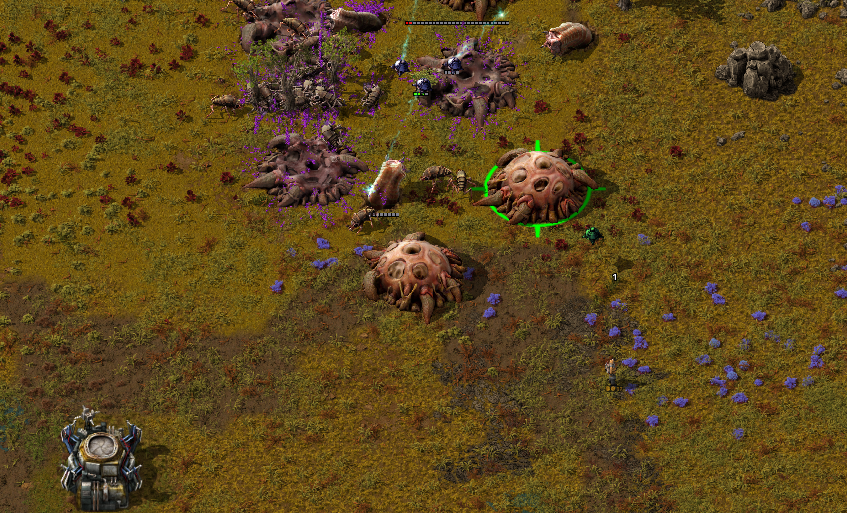 Air Purifiers clean up the air and allow for biter de-evolution.
There are 2 tiers of Air Purifiers both of which produce water and a by-product. The by-product can be used to create ore depending on the type of by-product.

Note 1: the by-product will change depending if sluge is not found.
Note 2: Air Purifies cannot be placed on tiles that do not absorb pollution and the amount of water/byproduct is dependent on the underlying tiles.
Note 3: de-evolution can be disabled in settings.

Adds 2 new mines one bigger and one nuclear option.
The nuclear option will highlight the safe zone if you hover over them.
Any mines placed can be detonated at anytime with the Boom button top right. 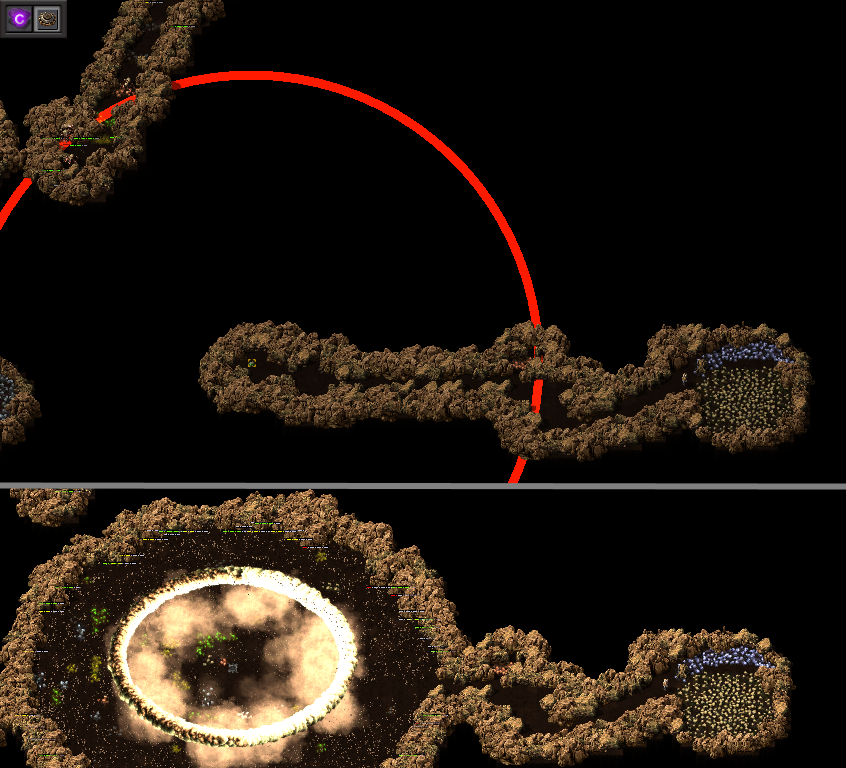 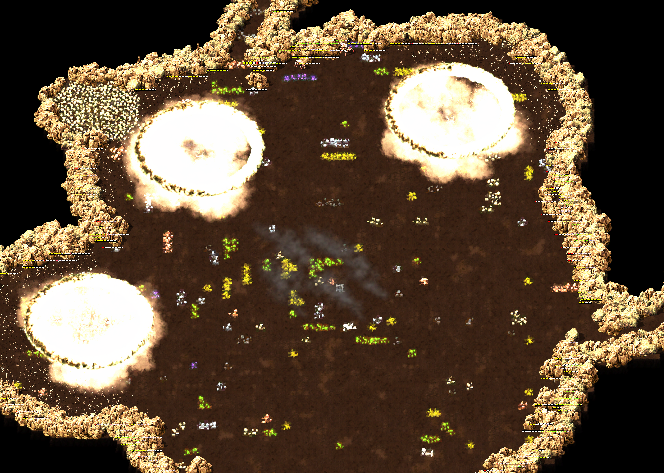 Note 1: You can set to detonate on the current surface or all surfaces in the runtime settings. 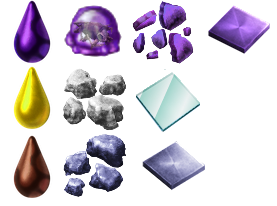 Regenerative Tech utilizes unique properties of the inhabitants of Nauvis to allow self healing structures.
Research is available to increase the rate of repair.

Adds another layer to the circuit to the production chain and makes more use or red and green wires.

The aquatic life is not without it's uses either. Use their oils or juices for medicinal reasons. 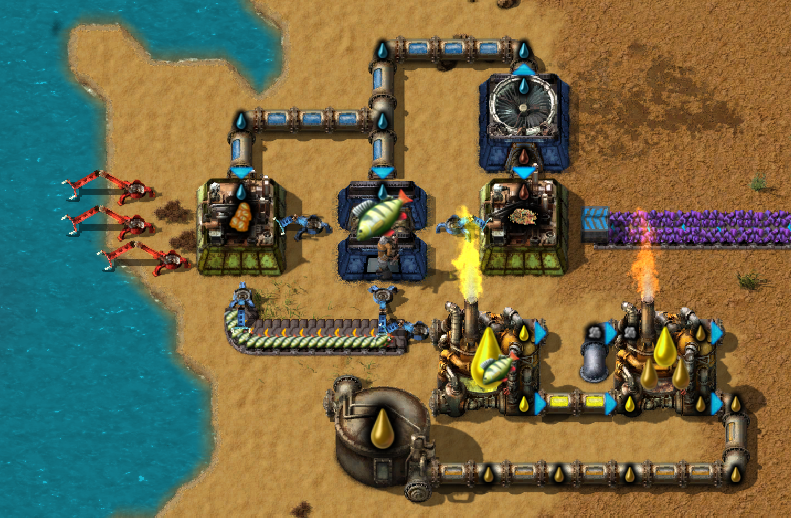 Add's pipes and fluid control systems.
You can create steam or condense it back to water, not very useful for power generation but handy for recipes.
Titanium pipes have an underground length of 15 and Discharge pumps can return excess water to the sea. 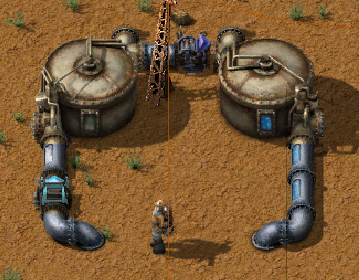 2 new tiers of belt's, undergrounds and splitters with the full range of mini loaders to complement.
The highest tier uses regenerative tech allowing them to self heal.

Inserters can be adjusted using CTRL + R by default but can be changed in controls or disabled.
Trans and wagons. Wagons can be loaded/unloaded by up to 6 loaders per side and Trains can have fuel loaded but wont accidently unload.
You can disable wagon support though if not being used for trains UPS shouldn't be an issue, the code has been optimized but it is done different way than other loaders and not as UPS friendly. I won't be altering how they work bar any fixes required as that would really just be ripping off somebody else efforts and I quite like the way these ones work.
Mini loaders can be disabled in settings. 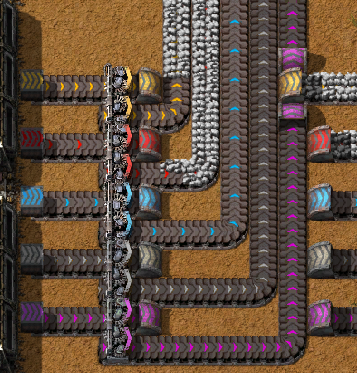 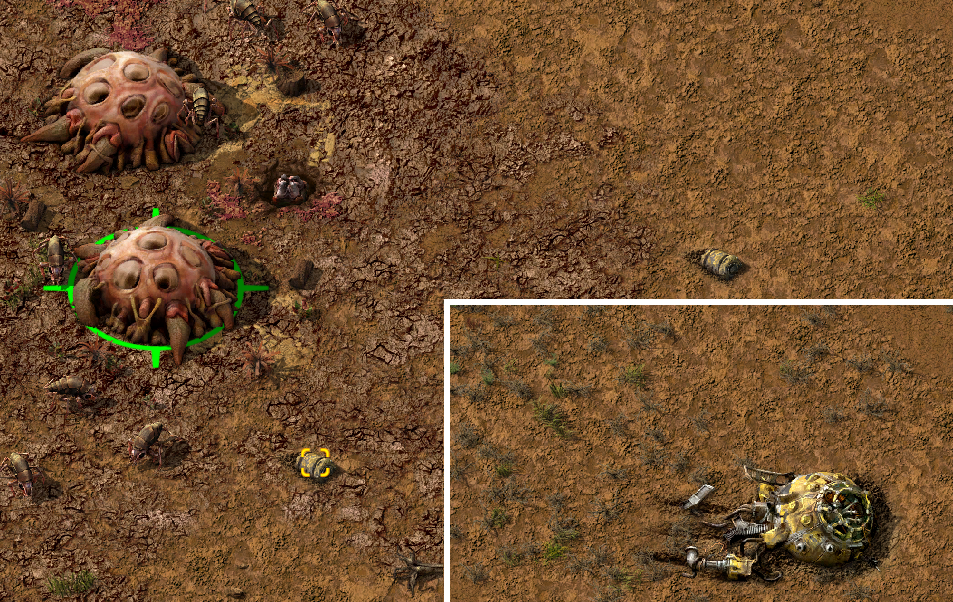 You can now recycle your unwanted goods, you just have to deal with a little waste material. 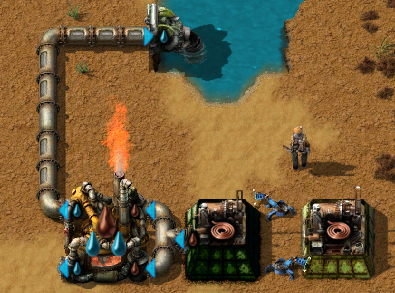 Ore refiners can refine ore which intern produce more plates or bricks.
items ending with ore that are in a recipe that end in plate are added. Darker tint to identify. 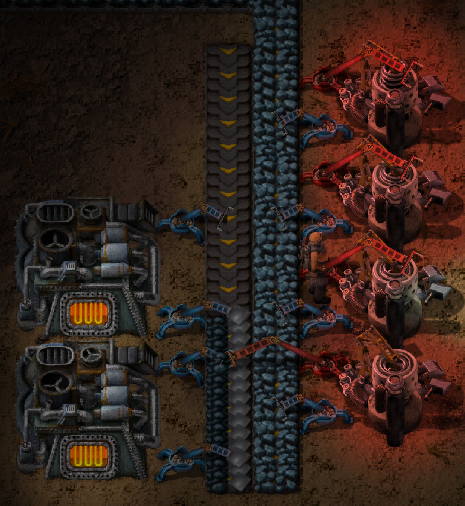 Allows conversions of one ore to other ores, Costly but can help if in surplus of one ore or really need another. Will produce all ores so let splitters sort it out. 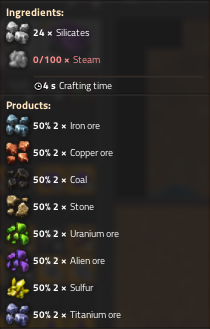 2 sublevels available the second by research.
Multi level shafts, no character transport but larger and multi-level acts as buffer chest each level has unique logistic requests
No water below and no fluid transport so get ready to start barreling.
Underground power transfer stations can be used to transfer power from Nauvis to the next level down but can't reach the deep dark you'll have to use Battery Cells to jumpstart the level.
Be warned the bitters have a bad habit of digging. 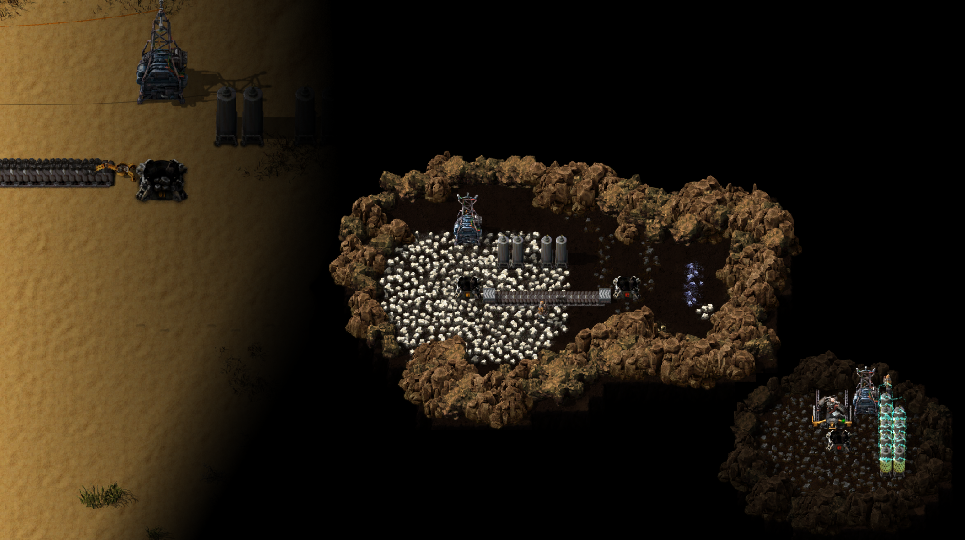 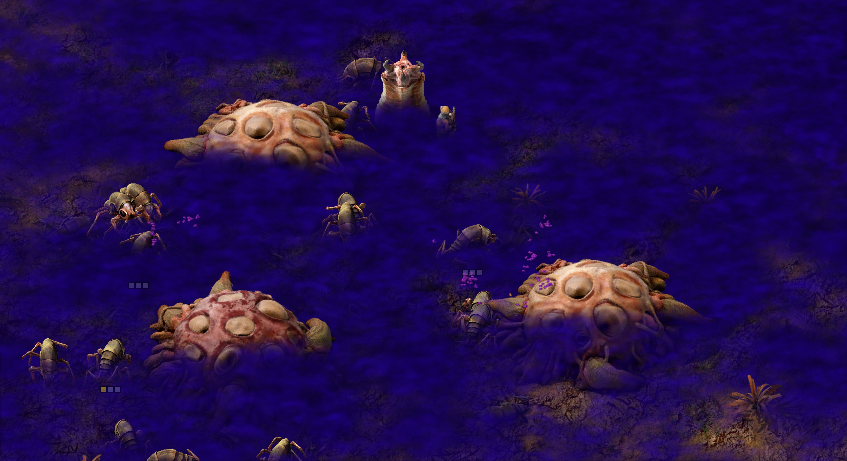 Transport items though the subspace network.

Using super material you can unlock sub dimensional pockets in space to stack basically everything.
Requires research per item and contained and uncontained in Assemblers MK 4+
Note: Default is Resources only but can choose Item's. Massive tech tree. 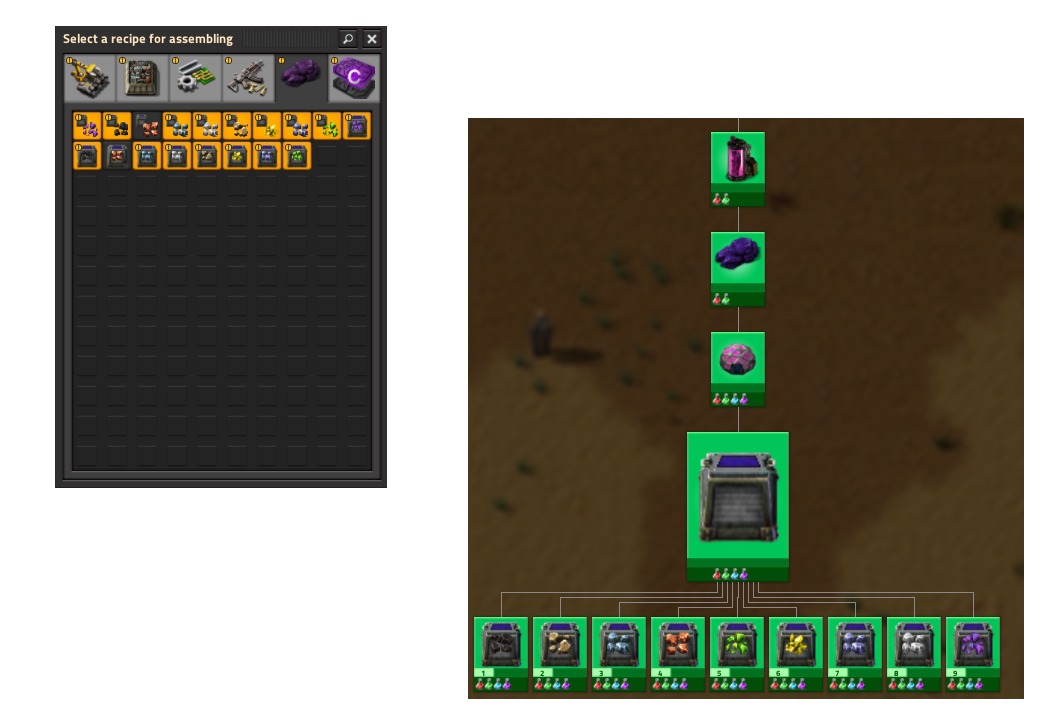 Throw at resorces patches to liberate ores for collection. Excludes uranium.
Simple port over from earlier ModMash with new specific item.
Still works with grenades wont be adding support for other explosives as it could easily become too op and to many items on the ground is not good. May add leave water tile functionality later.