A work-in-progress complete visual overhaul of Bobingabout's suite of mods
This mod reskins the items, structures, equipment, and technologies added to Factorio by Bob's Mods, adding tier coloring and labels. Care has been taken to emulate and align with Factorio's vanilla aesthetics.

This is a work-in-progress, and though most items, structures, and equipment that I plan to touch have been touched, there are a few structures and items still to do.

Localization
You are welcome to help with localization, please use this Crowdin project. You can find more details here.

Updated and colored vanilla Factorio entities
Every structure has received attention, and hand-brushed artisanal color masks bring rich color without washing out the details, rust, and vibrant sprites created by the Factorio artists.

Icons have been updated to the latest high-resolution icons found in vanilla Factorio, with coloring matching the structures themselves.

Enhanced and original sprites for Bob's custom machines
Where Bob has added new machines not seen in vanilla, care has been taken to enhance existing sprites or create new, original sprites to provide high-resolution visuals that align with vanilla Factorio.

Furnaces of all shapes and sizes have been improved with details denoting their function, and pipe connections that seamlessly blend with the structure itself.

Brand new sprites have been created, through donations from YuokiTani and original kitbashes of Factorio's base sprites. Pipe connections have been enhanced to match Factorio's pipes. Details have been added to help denote function.

Custom icons have been created, ensuring that each new sprite does not look out of place next to vanilla icons.

Items and Equipment improvements
Though structures have been the priority, and only a few remain, work has begun on items and equipment, bringing the high-resolution icons from vanilla Factorio to Bob's mods.

For example, the alien science packs have been redone in glorious high-definition.

And personal and vehicle equipment are receiving the same love and attention.

Remnants and debris
Where remnants exist in vanilla Factorio, colored remnants have been added in this reskin mod. Particle effects have likewise been tinted to match the color of the structure that was destroyed, for a more immersive, detailed experience.

If no remnant sprite was available, structures use generic remnants, and every structure and vehicle has had particle and explosion effects added. 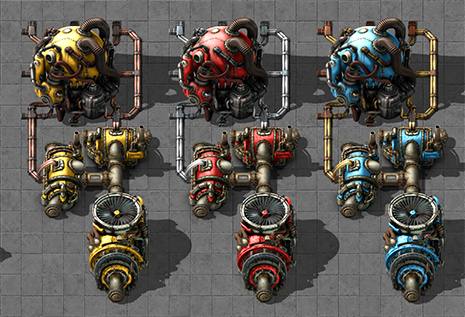 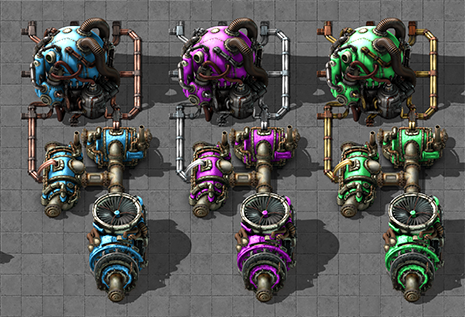 Tier Label Style
Choose between 6 tier label styles, whatever suits your preference. Rounded Rectangles are used by default. Examples of each are shown below at 200% and 100% UI scale. Pixels have been hand-placed at 64px and 32px resolutions for improved clarity. 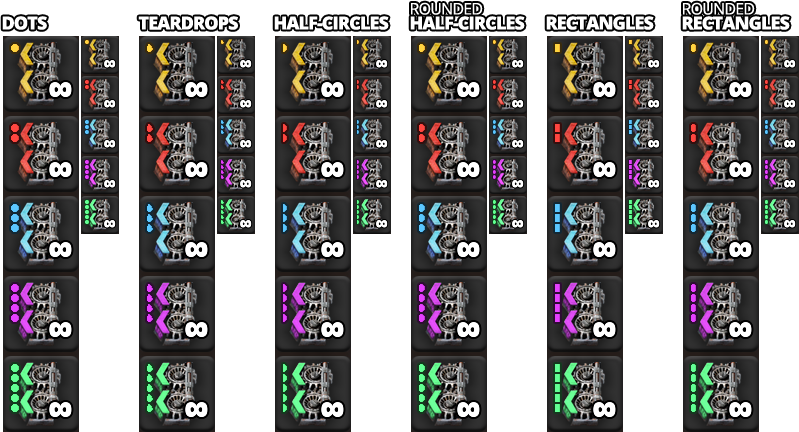 Custom Colors
Using 6 digit hex color codes, you can customize the tier colors used for structures, items, equipment and technology. If it has a tier color, you can change it, courtesy of extensive use of layered sprites and icons. In general, you will want to use colors with high saturation and vibrance. This is an advanced feature, so some experimentation and familiarity with hex color codes is necessary.

The example below was customized using the palette found at color-hex.com.

Assorted customizations
Beyond those three main features, you are able to toggle reskinning by individual Bob's mod, as well as turn tier labels on and off for furnaces, inserters, belts, and pipes. There are some additional customization options, and you are encouraged to explore the startup settings.

Thanks to YuokiTani for his contribution of high-resolution electrolyser, logistics zone expander, robot charging pads, small/in-line storage tank, sniper turret, valve, air compressor, and barreling machine sprites. Without him, this mod would not be as good as it is.

Thanks to Vigil for his contribution of high-resolution silicon boule, wafer, solder icons and other assorted icons.

Thanks to Snouz for his contribution of high-resolution icons for artillery shells, rockets, laser rifles and batteries, the scatter cannon shell, mines, and cordite, and his general interest in continuing to contribute.

Thank you to everyone on Discord, Reddit, and the Factorio forums for your feedback and comments. It has helped shape this mod and made it into what it is today.