Special entities that wirelessly charge bots around them. An idea by Mike C from the KatherineOfSkies community.

Related to roboports and logistic robots.

Bots waste a lot of time and energy having to recharge in the middle of their activities. But if you've got module effect transmission already, how hard would it be to beam electricity around as well...?

Enter the Bot Charger, the only entity added by this mod (for now!), which works exactly as it says on the tin. 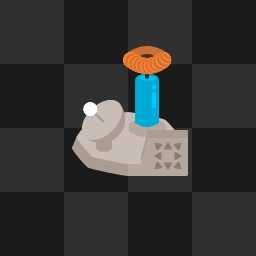 (If you're one for a visual demonstration, Xterminator did a mod spotlight video on Charge Transmission v0.5. Thank you so much!)

From now on, the charger will listen on any robots wishing to recharge themselves and top them off before they move towards the roboport, saving time and resources at the expense of some extra energy.

You know it's working when you see sparks flying off the roboport at the hapless robot (can be toggled off). 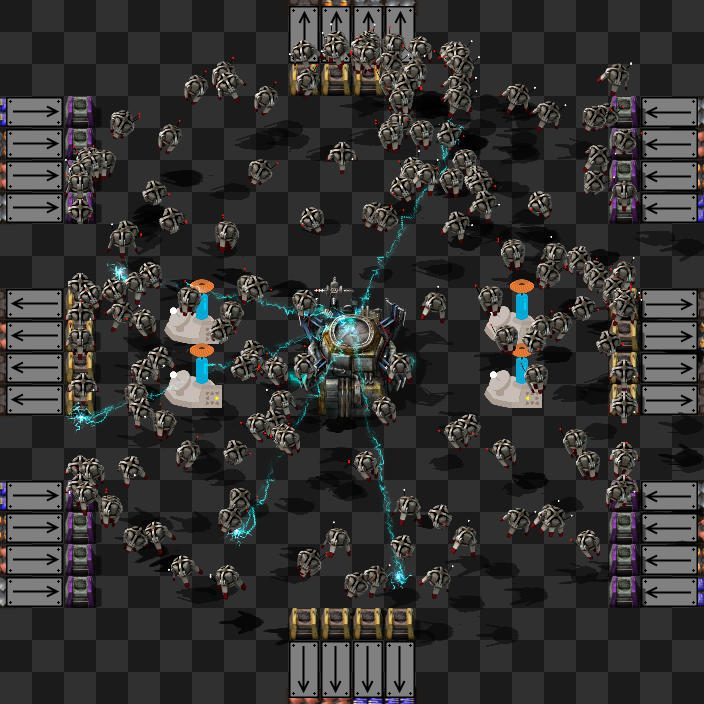 (If it looks weird, that's because the energy blasts are aimed at a robot's shadow.)

Chargers connected to the same roboport will share the load between themselves; this is important as each charger has a limited energy input amount and can only fulfil so many robots (see Overtaxing below).

Chargers will try to pair up with the closest roboport by default, preferring roboports that are already connected to other chargers. You can see what roboport a charger's servicing by the direction its arrowed display shows (or none if the charger is unpaired), and hovering your mouse over it will display a giant arrow pointing at the target roboport.

To change the target roboport, rotate the display with R until the arrow points at your preferred spot. A roboport will only be a possible target if it is inside its logistic range.

As the unlocking technology for them hints, chargers are retrofitted beacons for electricity. And with how power hungry chargers can be (see Power usage), it would make sense that you'd be able to improve this somehow. 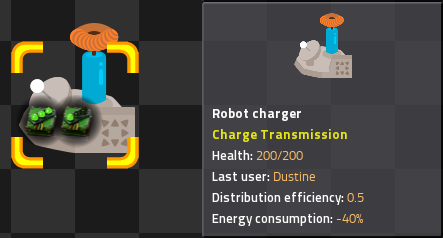 Chargers have the same distribution efficiency than the basegame beacons, halving their possible effect. Chargers also have no coverage area, as shown, so its beaconed effect (that can only be energy efficiency) only applies to that specific charger and its assigned roboport for wireless charging purposes. Also, charger performance can't be affected by other chargers or beacons, selfish as they are.

You can also disable this feature on the mod settings, but the mod is balanced around the usage of modules.

A targeted roboport will display a custom alert over itself when it is overtaxed. It's hard to miss as it blinks like any other in-game alert. That and it's usually surrounded by robots being recharged by said roboport.

It also shows up as a custom alert for players and on one's map.

This means that the chargers can't cope with recharging all their target robots. Now, either your power supply isn't sufficient or, most likely than not, there's just too many robots as each charger can only supply so many robots.

An overtaxed charger will deplete its energy buffers first, always charging as many robots as it can with it. This means that power hiccups shouldn't cause the system to stop, but if it isn't resolved fast enough it'll end with with robots recharging on the roboport, as shown above.

Easy solution though: chargers that point to the same roboport will share their work load, so just add more chargers (and don't forget the modules)! It can also pay to wait, as it could indeed just be the equivalent for rush hour for your network. Still, if you see the alert, it won't hurt to construct additional chargers.

Sorry to say but charging robots can be a bit demanding on one's machine. You may not notice this on a regular playthrough, however, as one of the main focus on this mod is optimization, by mere necessity.

Even so, if you're finding your game is chugging behind, or the opposite, that chargers seem to be under performing, please check the mod settings (Options → Mod Settings → Map). They're specific to each savegame so you can further customise your experience. 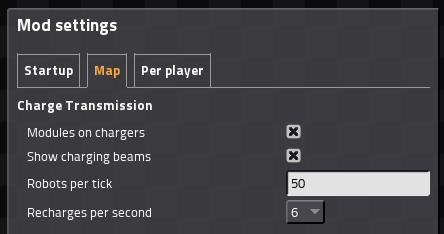 Each option has a helpful hover-text explaining what they do, but if you need a quick primer to boost your performance: turn off charging beams and decrease the recharges per second. Bots per second can also help if decreased but from my testing, usually not with as much impact as the other two. If anything, I recommend increasing it for megabases, although ~maths~ says that shouldn't be necessary until you reach the equivalent of a +4GW demanding robot equivalent on the basegame.

Not only chargers use a lot of power because they have a x3 energy usage without modules, robots aren't cheap to run to begin with (and get more power hungry the faster they are). There's a reason basegame bot bases usually have roboports as their number one power consumer.

A single charger feeds at worse between 174 to 49 robots over time (before space science), depending on a robot's speed. But several chargers together, as they share their workload in between similarly targeting chargers, can easily tackle even the biggest of logistic networks.

Oh, and use efficiency modules, because you can up to double the performance of each roboport and even a single efficiency 1 module makes chargers reduce their power consumption to 255%. I recommend two efficiency 2 modules per each if you want to save on resources.

If you want more detailed statistics and explanations, there's a more complete version of this section over at github.

My charger doesn't seem to be doing anything

As of v0.6 that shouldn't be an issue any more because of the (on-by-default) charging beams. Sadly, the antenna spin seems to... not work any more. Make sure the charger is connected to a target (see below) and powered.

Okay, my chargers don't seem to be doing enough

Okay, that's something different. There's a few possible solutions, most telegraphed by the game itself.

For the first one, hover your mouse over the charger's display and see if it points to any roboport. If not, pick and place the charger on a more suitable (closer) place.

The second and third issues are usually telegraphed in-game by orange alerts. You can also see this happening if, when hovering a charger's display, the shown electricity bar is consistently on the red. If that's the case, either add more chargers (if you have enough power) or boost your power production.

For the last one, you'll need to increase the performance settings (see UPS considerations above), and see if that does help or not.

My game is lagging

Hey, don't point fingers at me right away. Check performance statistics with F6 and try decreasing your game graphical settings first, but if you're sure CT is behind any lag, please check UPS considerations above. I got ya covered!

Also if nothing of this does help your game, consider this as a bug and please check the following FAQ.

I found a bug! Please fix it

Sure! But I'll need a bug report for it. Follow the forum guidelines for bug reporting, so that means: describing what you were doing (+ steps to replicate the issue), what other mods you have installed (in a .zip archive), what version of this mod you have and sending me your bugged save-game alongside your /mods folder. All these steps will make your issue much easier to diagnose and to be fixed.

DO NOT post your bug report here on the mod portal, as it doesn't notify the mod maintainers about new posts or replies so it may take literal weeks for stuff to be noticed. Please, please, use the forum thread or github repo to make your bug report.

This mod contains graphics adapted from the icons made by Roundicons and Gregor Cresnar from www.flaticon.com under a CC 3.0 BY license.