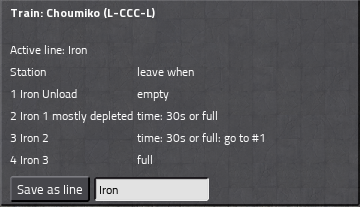 Overview of lines managed by SmartTrains. Accessible by opening a locmotives or trainstops GUI.
Shows the number of stations for the lines, as well as the number of trains assigned to the lines.
Un/checking the 'active' checkbox will un/assign a train to the line. Unassigning a train removes it from the line, but keeps the schedule intact (minus the goto rules)
You can delete lines by checking one or more 'marked' checkboxes and then clicking 'Delete marked'.
To rename a line mark one line, type in the new name and click 'rename'.
Clicking the rules button opens the UI for line rules. 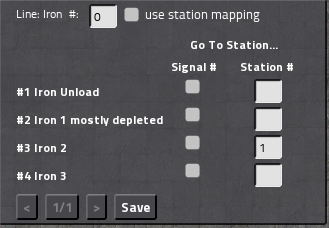 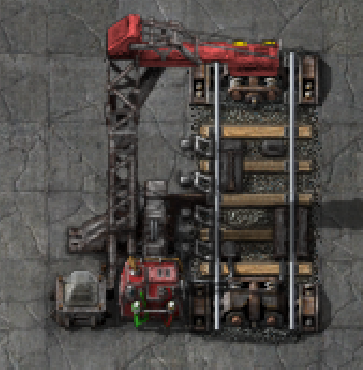 The smart train stop has two additional components compared to a normal train stop
- The signal lamp: Only used in combination with the "Signal #" rule. When a train leaves the station because its waiting conditions became true, it goes to the station specified by the signal in the lamps condition.
Notes:
The condition does not have to be fulfilled, as long as the train leaves before its waiting time is over it will use the signal.
If a train should leave when the condition is true, simply set the condition in the train schedule / line to the same as the lamp condition and connect the lamp to the trainstop via red or green wire.
- The signal output: Outputs various information about the train currently at the station:

: Number of players in the train
-

: The line number assigned to the trains line, 0 if not on a line
-

: The lowest fuel in a locomotive of a train (in MJ)
-

: The number of the station
- Outputs the number set in the mapping or
- outputs the position in the trains schedule if there is exactly 1 line
-

: The # of the station in the schedule where the train is going (set for 1 tick when the train leaves)
- Additionally it outputs the trains cargo 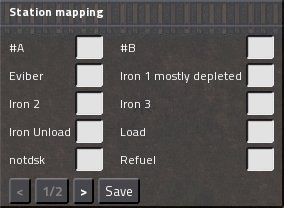 - Accessible when opening a station GUI.
- Allows stations to be assigned a number. If a line has "Use station mapping" selected, it will try and go to the station with the corresponding number when used with the Signal # or Station # rule. (As opposed to going to the station at the number in the schedule)
- Todo: make that description less confusing.. 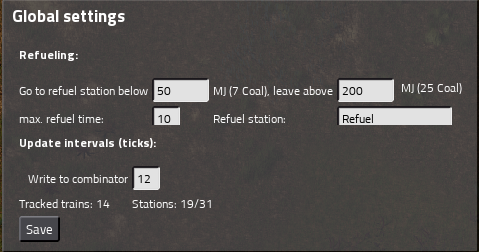 - Refueling: Sets the lower and upper limits for available fuel. If any locomotive of a train is below the lower limit, it will add the refueling station, if all are above the upper limit again it will get removed.
- Update intervals: Number of ticks between updating the constant combinators at smart train stops.

3.0.2 and above: see ingame changelog